Lewes.com is the online business directory for Lewes and its surrounding region. Join the ranks now and advertise with Lewes.com today! Click here for more information.

A Brief History of Lewes 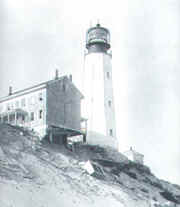 Twenty-two years after it was discovered by Henry Hudson on an August evening in 1609, the point of land separating the Atlantic Ocean from the Delaware Bay, now known as Cape Henlopen, was selected by the Dutch as an ideal site to establish a whaling station. It was not an auspicious undertaking. The thirty-two settlers were destroyed by a group of local inhabitants, as a result of a dispute over a Dutch coat of arms the settlers had mounted on their settlements.

In 1862, the land which now comprises the State of Delaware was conveyed to William Penn by the English Courts at which time the embattled settlement was names Lewes (loo-iss) in honor of the town in Sussex County, England.

But the travail was not over yet. The town was visited by Captain Kidd and other pirates as late as 1698. And then during the War of 1812, a British frigate bombarded the town. The casualties were a wounded pig and a dead hen. One of the town buildings still proudly wears an embedded cannonball from the bombardment.

Through all of its hectic history, Lewes has been essentially a seafaring town. Blessed with an excellent harbor, it still remains an East Coast port of call and is home to a large fleet of charter fishing boats stationed on the canal along Pilottown Road. It is likewise the base of the Delaware Bay and River Pilots Association, whose members guide cargo vessels to and from the ports of Wilmington and Philadelphia. Lewes is also the site of the University of Delaware College of Marine Studies and is the southern terminus of the Cape May-Lewes Ferry.